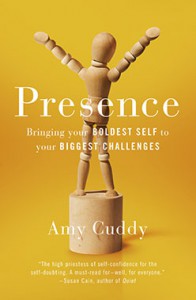 Amy Cuddy splashed onto the popular culture scene in 2012 when she was featured as a TED Talk lecturer. A Harvard Business School professor and psychologist, Cuddy advocates changing the way we use our bodies, which in turn changes the way we are thinking, feeling, and acting. With Harvard colleagues, Cuddy designed a series of experiments to answer this question: If nonverbal expressions of power are hardwired, and our emotions are as much a result as they are a cause of our physical expressions, then what would happen if we adopt expansive postures even when we are feeling powerless? Results from their first experiment suggested that, indeed, the body shapes the mind. Changes to a subsequent experiment measured not only the subjects’ self-reported feelings and willingness to take risks, but also measured hormonal changes. Subjects employing a Power Pose (feet apart, hands on hips, head up, eye gaze out) had increased testosterone (the assertiveness hormone), while cortisol (the stress hormone) decreased. Decades ago Frederick Matthias Alexander pre-figured Cuddy’s present day … END_OF_DOCUMENT_TOKEN_TO_BE_REPLACED 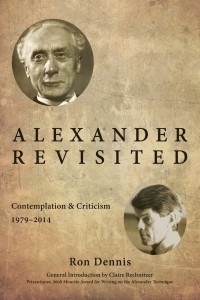 Alexander Revisited; Contemplation & Criticism 1979-2014 by Ron Dennis With a General Introduction by Yours Truly… Penning the General Introduction to Ron Dennis’s new book surely disqualifies me from reviewing it, however, in the interest of getting word of its recent publication out to the public, especially to the kind of public that reads this e-zine, I am taking the liberty of offering a brief description of its contents along with my wholehearted recommendation. The book is a collection of articles, research, reviews and letters that have appeared in various publications over the span of a long career. There are pieces that examine what Ron deems ‘a crisis’ in Alexander Technique theory, and others presenting a strong case for formulating core concepts in ways we can all agree upon. His own definitions are carefully reasoned and set a standard that inspired me to check my own thinking. There are descriptions of research methodologies and findings regarding applications of the technique, and research that offers insight to and reflections on Alexander’s … END_OF_DOCUMENT_TOKEN_TO_BE_REPLACED

Check out the new website, Alexander Studies Online, for a fantastic resource including studies, research and more on The Alexander Technique. Their Vision Statement: The Alexander Studies Online mission is to develop a platform and opportunities for publication that will contribute to deepening the understanding of the Alexander Technique, both inside and outside the profession, by facilitating informed debate and the exchange of ideas within the international Alexander community creating a framework through which people engaged in research and other forms of disciplined inquiry can support one another’s work offering a repository of resources and information for people who want to explore the Alexander Technique in more depth … END_OF_DOCUMENT_TOKEN_TO_BE_REPLACED