↓
Home Menu ↓
Skip to primary content
Skip to secondary content
Home→Guild Magazine→Claire Rechnitzer Reviews, The Posturality of the Person: A Guide to Postural Education and Therapy by Ron Dennis 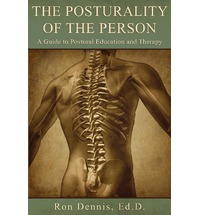 The Posturality of the Person

A Guide to Postural Education and Therapy

Spot-on and delightful, Ron Dennis’ new book on postural education should prove useful to novices and experienced practitioners alike. It does a great job “selling” the desirability of postural education in general and provides compelling indications that argue the advantages of The Alexander Technique specifically. Furthermore, bearing in mind that in the real world (as opposed to various “musculoskeletal provenance” theories ) “…it is the individual teacher…who will have a philosophy and a program inviting assessment according to the criteria developed in [his] book.” Dennis shares his research, sources and findings with a generosity and candidness that is both heartfelt and humble. The conversational tone, wit, precision and eloquence of his writing are sorely welcome in a field where typically, words fall short of meaning – let alone experience. (Not to mention that his style too, may possibly be infectious.)

The book begins with 22 logically ordered conceptual foundation statements which do well to serve as a “comprehensive, comprehensible and workable theory of normal posturality.”  As these concentrated, attention-worthy statements are referenced and explained later in the text, Dennis provides a nifty bookmark to revisit them with ease. This chapter is followed by several that clearly explain the concept of length and the practice of Lengthening as a function of Dynamic Posturality. Readers who are just beginning to explore the potential benefits of improved use will likely find that focusing the conversation on moving and breathing as a postural process just makes sense once the what, why and how of lengthening is explained. Practitioners may find Dennis’ language particularly useful. For example, his distinction between “folding” and “bending,”“existential movement” as opposed to “arbitrary movement,” or his appropriation of breed standard concepts from animal judges. Finally, the distinction he draws between “posturality” and “posturology” (no matter that my spell-checker flags both) is careful and insightful. Anyone who thinks that the word Posturality rings contrived would do well to enrich his or her own vocabulary and discernment by studying this short, crystalline book. Once understood as defined by the author, posturality is as useful and meaningful a word as mentality or personality.

On a personal note, I particularly appreciate Dennis’ matter-of-fact discussion of the mind-body union as it pertains to physical and psychological wellbeing, not least in the ‘Muscles and Mentals’ appendix. Throughout the book, Dennis’ respect for his readers’ intelligence engages imagination and curiosity along with suggestions for muscle-engaging experiments and practicing “Optimal Metabolic Breaths.” Though Dennis frankly advocates learning with a teacher, I believe this book has much to offer motivated learners as a resource for self-study in its own right, as well as being a possible catalog for additional reading.

Claire Rechnitzer graduated from Alexander Technique of Cincinnati (ATOC) in 2008 and has been teaching in Cincinnati since then.