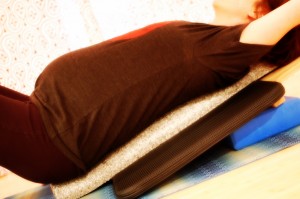 Very recently I had the privilege of working with a woman using The Alexander Technique during her pregnancy.  She had an amazing pregancy; the kind other women envy.  I teach a Pilates class mixed with The Alexander Technique. No one else in the class was with child but being the community we are we wanted very much for our soon-to-be-mama to stay with us for as long as possible. We modified our workout to avoid laying on our back for long periods of time, did more standing work, and limited her stretching to well before her maximum to protect her ligaments and joints. We used special props to give her added support when we were doing things that were out of her range of comfortable.  Overall she found The Alexander Technique during pregnancy very helpful.

It is important to note that our mama in question was taking the Pilates portion of this class for 3 years prior to pregancy.  She had the all clear from her OB-GYN to continue this vein of exercise.  Women who are newly pregnant shouldn’t start a core centered fitness regime while they are pregnant.  However, The Alexander Technique could be started at any time during pregnancy.  In fact, there is strong evidence that improving the mother’s posture can reduce the mother’s back pain,  the need for medical intervention during the birth, varicose veins, emotional stresses and can make more space in the pelvis during delivery.  If you are expecting, I highly recommend the book, The Alexander Technique Birth Book, by Ilana Machover and Angela and Jonathan Drake.  It is an exhaustive overview of using The Alexander Technique during pregnancy, natural child birth, parenthood- and let’s just say life!  It has gentle exercises to help relieve tension and keep mama happy.  As for our mama, she continued with us all the way till the end.  In fact, she gave birth several hours after our Tuesday night class!!!

One problem The Alexander Technique during pregnancy addresses is the weight of the uterus.  The uterus towards the end is not only filled with a baby but the baby is surrounded by fluid.  I have no idea how much a typical uterus weighs during pregancy but I can tell you my spine gets unhappy after a large meal let alone 10 plus pounds of added weight.  During standing work we really allowed the neck to be free so that the head was poised over the spine to ease pressure off the lower back.  We also focused on releasing the lower back into her heels so that the ground was holding the added weight and not her vertebrae.  Next we did use something called Monkey to help release her hip joints and knee joints so her spine could be free from their weight.

Using The Alexander Technique during pregancy helps the mother to direct her body in directions of ease and poise and away from patterns that create more stress on her already stressed system.  The weight of the uterus becomes a problem in all planes of movement for the pregnant woman so we continue to use direction when we are on all fours doing leg work and simple spinal articulation.  We got most creative, using props to keep her comfortable while laying on the her back.  In that position, the weight of the uterus can block the vena cava, the vein that pumps blood from the legs up to the heart.  This problem was solved by propping two yoga blocks under a Pilates Jumpboard (any board could be used but I would add some sort of padding from a yoga mat or two).  We also, use a foam roller during class to aid in releasing the rotator cuff (shoulder joint) so we laid it on top of the stack.  This mother-to-be- was able to participate in her a regular Pilates class aided by small props and The Alexander Technique during her entire pregnancy.